BEARING WITNESS TO JESUS AS THE SAVIOUR 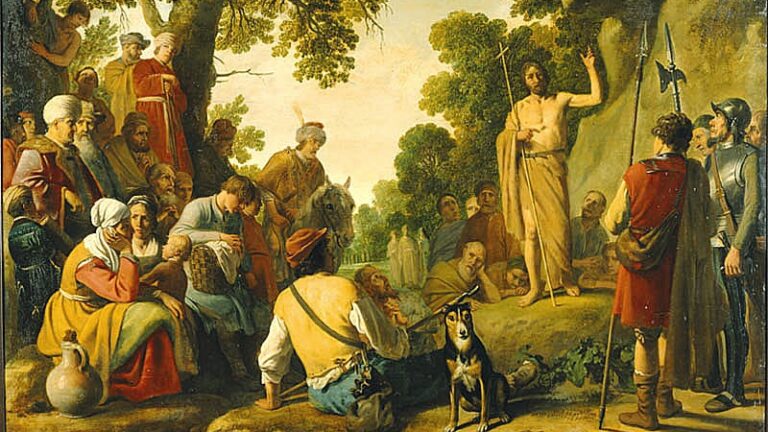 Beloved, as we prepare to celebrate the birth of our Lord and Saviour, Jesus, we are reminded that at His first coming, many of His own people rejected Him, and consequently, missed the ultimate blessing of salvation.  However, those who did accept Him and bore witness to Him were saved (cf. John 1:1-18). We are, therefore, enjoined to bear witness to Jesus as the Saviour of the world.  In this homily, St. John the Baptist is presented to us an excellent example of bearing witness to Jesus as the Saviour.

When the Jews returned from Babylon to their Promised Land, they were faced with the difficult task of reconstructing their Temple, the city of Jerusalem and other cities and towns. Besides, the economy was bad, and this was evident in the widespread poverty.  It was to this people that the message of today’s first reading was first addressed.  It was a message that assured God’s people that would be saved from their difficult situation.  Thus, the prophet stated: there is good news to the poor, the brokenhearted will be healed, captives or prisons will be liberated, and the Lord’s year of favours and restoration will be experienced. Moreover, all this will happen through someone God will choose and anoint (Isaiah 61:1-2).  The Greek word for the “Anointed One” is what is translated in English as “Christ”.

Years later, when Jesus visited Nazareth, He would take the scroll of the Prophet Isaiah and read the above passage and remark the prophecy is fulfilled in Him.  That is, He is the One the Father has anointed to save us. In other words, he is the Christ who has come to save us. His people will however not believe in Him (cf. Luke 4:16-21).

From the conception, life, ministry and death of John the Baptist, we learn the following lessons about bearing faithful witness to Jesus Christ:

Belief in our calling to bear witness to Jesus Christ: John strongly believed that God called him, even before he was born, to bear witness to Jesus Christ.  This strong conviction made John steadfast in all circumstances.  Beloved, like John, God called us before our births to be witnesses of Christ. When the prophet Jeremiah wanted to run away from his mission, he was told: “Even before I formed you in the womb I have known you; even before you were born I had set you apart and appointed you a prophet to the nations” (Jer. 1:4-5). This applies not only to Jeremiah and John but to all of us (cf. Psalm 139:13-15).

The role of parents in sustaining of obligation to bear witness: John’s conception and birth were to be so special that his mother’s womb remained barren until God decided to bring John into the world. It was as if God planned that no one else was to use the ‘room’ (Elizabeth’s womb) reserved for the great prophet. Thus, destined to carry out a special mission, John was conceived when his parents (Zechariah and Elizabeth) least expected it (Luke 1:5-25). Secondly, it was the angel Gabriel who announced the name ‘John’ – a name unusual in his family – even before he was born (Luke 1:13, 60-61). Thirdly, even before John was conceived, God had designed he would never take wine or strong drink, but rather he would be filled with the Holy Spirit (Luke 1:15).

John’s parents certainly brought him up to appreciate the special circumstances of his conception, birth, naming and to constantly cherished the mission God had entrusted to him. In short, John was brought up by his parents to know that he was specially chosen by God to bear witness to Jesus as the Saviour of the world.  Similarly, parents should bring up their children to cherish their faith in Christ and to bear witness to him.

Personal preparation for credible witness: Besides his upbringing, John prepared himself to become a credible witness to Christ. For instance, John went to the desert to prepare through prayer, fasting, and other forms of asceticism. By so doing he submitted himself to the Spirit of God (Luke 1:80). Secondly, he led a simple life seen in his place of abode, dressing and the type of food he ate. Thirdly, no strong drink ever touched his lips and no razor touched his hair, in accordance with the angelic message.

Similarly, we must regularly pray and meditate on the Word of God, practice penance, and embrace a lifestyle pleasing to the Lord. Secondly, to fulfill our specific mission, we should identify our vocation by assessing and using our interests, talents and training in ways which bring glory to God and benefits to society.

Witnessing with integrity: John could have taken advantage of the false expectation of the Jews.  Many of them taught John was the Christ.  However, being a man of integrity who was focused on the mission God had entrusted to him, he denied being the Christ and stated that he was a mere messenger sent to prepare the way for the Christ, whose status was far higher: “I am not the Christ …. I baptize with water, but there stands One among you whom you do not know. It is He who, coming after me, is preferred before me, whose sandal strap I am not worthy to loose” (John 1:20, 26-27).

So focused was John on his mission that Christ must increase and he (John) must decreased (cf. John 3:30).  Indeed, he was so steadfast to his mission that not even the threat of death would shake his resolve to bear witness to Christ.  Thus, he will bear the ultimate witness with his death at the hands of King Herod (cf. Matt. 14:1-12).  Beloved, John teaches us that we should witness to Christ with integrity – that not even the danger of death should sway our resolve to testify by words and deeds that Christ is the Saviour of the world.

Conclusion: May the Spirit of God grant us the grace to continue to develop our resolve to witness to Jesus Christ as the Saviour of the world; may our witnessing by words and deeds be steadfast and authentic in all circumstances; may we ultimately enjoy the reward of eternal life with John the Baptist and all the saints. Amen!

Very Rev. Fr. John Kobina Louis is a priest of the Archdiocese of Accra, Ghana.

Catholic Homilies and Sermons for the liturgical year by Rev. Fr. Dr. John Kobina Louis of the Archdiocese of Accra, Ghana.